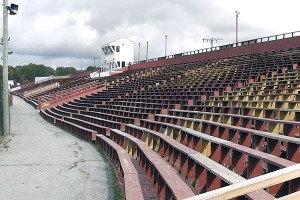 Seriously, is this real?  As I sit down to type out my thoughts on April 1, I keep hoping someone will tell me this is all a really bad April Fool’s joke… but of course, that’s just wishful thinking.  The recent news about the Speedbowl owner is all too real and really hard to take.  I’m devastated, heartbroken and feel betrayed.

My phone actually died in the middle of the afternoon on Wednesday… never had that happen before.  Phone calls and messages were coming in rapid fire.  “Did you hear?” “What are you going to do?” “Does this mean the track won’t open?” and my favorite – “Will this be in the documentary?”

For the record, the 6-part documentary series on Speedbowl history ends with the track’s survival through the foreclosure auction during the 2014-2015 off-season.  Maybe someday down the road I’ll make a part 7, but I have enough problems finishing the first 6 as it is.  Unfortunately, the ending was going to briefly profile the winner of the auction as the track’s savior with our long-awaited hope of the track being financially stable becoming a reality.   Depending on how things play out over the next few weeks and months, that may not necessarily be true now, and like many things with this long production, the Speedbowl’s story is changing faster than I can finish it.  I’ll deal with that later – I still have a ton more to do before I’m editing a new ending together.  But thought I’d mention it as I have been asked about it frequently lately.

I guess where I’ve been struggling the last few days is this ‘here we go again’ scenario that I naively thought was over.  I’ve literally spent years studying the track’s history, it’s survival against so many odds that seemed to indicate it wouldn’t.  I’ve interviewed every living track operator and recorded their stories on camera.  And ironically, many of their stories are quite similar.   They all dealt with the Town of Waterford not really wanting them there.  Most at one point or another dealt with residents who live close by trying to get the place shut down.  Even before Terry Eames’ well-publicized financial struggles, there were times when track owners listened to offers from developers to turn the property into something different.   And the track survived through them all…

But this is different.  No previous owner has ever been arrested for such a disturbing crime.  And while those actions should have no reflection on the Speedbowl’s community other than the owner, it is big deal, and something people need to at least discuss when it comes to supporting the place.

I’m really upset with the Speedbowl owner.  I’m upset he brought this drama to our beloved playground.  I’m upset this disturbing situation is all over the news and “Waterford Speedbowl” keeps being repeated in the coverage.  I’m upset the casual fan or local resident who knows little about racing will once again just hear the bad side of the off-the-track struggles without any compassion or understanding of how the place is part of the fabric of the racing community and part of so many people’s lives & family history.  I’m upset that we just went through a decade of wondering if the place would survive and now, after 2 short years, we once again have to wonder if the track will survive. 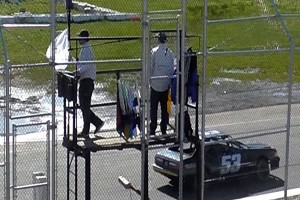 This guy was supposed to be our savior, and while he did some good things to improve the facility, I’d take the facility as it was the day of the auction and without the latest developments we’ve all been reading in the news.  I’d sign for that trade in a second.

So what do we do know?  That is what I think most of us are struggling with.  I know I sure am.  I’ve seen some posts on my FB feed from non-racing friends who’ve shared the news story and pledged to never even consider going to the Speedbowl…. And if I wasn’t so close to the place or it’s people, I’d probably feel the same way.  I’ve been that disgusted with all I’ve read about the owner lately.  But it’s not that simple for us, because we love the place and have for many years before any of us even knew the owner’s name.

I’ve also seen others within the racing community pledge to continue to support the place regardless of the owner’s current situation because not supporting it could lead to another track disappearing from the region’s landscape… like Danbury, or Plainville, or West Haven, or Westboro, Norwood, Bridgeport, Lonsdale, Riverside Park….  Clearly there have been too many that have disappeared from Southern New England over the years.

Nobody knows for sure at this point if the track can or will open.  And although the team in place to operate the joint have publicly ensured it will, it may be possible that the legal process could potentially overrule any such plans.  And for us in the Speedbowl community, that’s a fear we are all too familiar with. 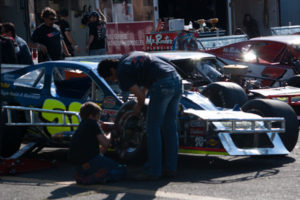 What I hope people do understand is that if the track doesn’t open for business this year, that doesn’t mean the track is gone forever.  The gates could not open for years and as long as it’s not used for any non-racing type business, it can once again re-open as a racetrack.   For those who don’t know, the track doesn’t not conform to the current zoning regulations in the Town of Waterford.  But since the track has been there longer than those regulations, it is ‘grandfathered’ therefore allowing it to continue as a non-conforming use.  Once the property is used to conduct another type of business, that grandfather clause is rescinded permanently.  But if the property just stays dormant (like Plainville did for so many years) it can re-open as a race track again.  I am by no means an expert on Waterford’s zoning regulations, but during my research of the track, I visited the Town Hall many times and reviewed documents to learn about how that all worked.  Pretty confident the above is still accurate today.  Besides, the track not opening as scheduled is only a possibility, I think it’s too early to tell if the upcoming season will actually be affected at all.

And this time, it’s about more than just if the track opens.  I can understand if a majority of our gut reactions is to immediately be concerned with the track’s survival.  Like I said, we’ve done that for years.  We love racing, we love the Speedbowl and short tracks don’t open across the country these days, they only close.  I get all of that.

But this is a different situation, it involves more than that.  This time, the situation also involves disturbing conduct, illegal conduct.  Conduct that many people, including myself, now have to consider if they want to be affiliated with the place in any way.  It may affect sponsorship of the track or the race teams or my web series or anything related to the Speedbowl.  Sponsors are largely local businesses, and business owners now have to decide if they want to support a place connected to such disturbing news. 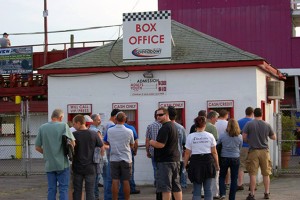 I believe that there are many who believe that the Speedbowl and the owner’s issues are not connected but I don’t currently agree with that.  The reality is, if a business owner is concerned that advertising with the Speedbowl right now would hurt their business more than help in light of recent news, they may just spend their advertising dollar elsewhere.  That’s completely unfair to the Speedbowl community, but it’s more than likely accurate, especially when it comes to generating new sponsors.   And it would be the same situation trying to generate new fans.   It’s possible that all current race teams, fans and sponsors can look past all of this for a greater love of seeing the place survive once again.   But good luck bringing in new people.  The promotional job requirements at the Speedbowl just got a lot more challenging, and the PR position has already been vacant for a while.  There’s real issues there.  Again, the owner’s conduct should not reflect that of the Speedbowl community, but that conduct will affect the Speedbowl.  Sadly, as long as he’s the owner, it just will…

Of course, you can make the case that if operating the place just got more challenging, it’s even more important than ever that we all bond together to support it.   And while I agree in the sentiment, this time, under these circumstances, it may not be that simple for everyone, myself included. 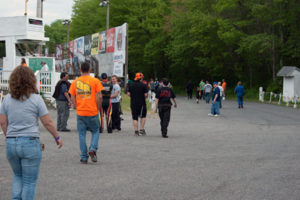 Everyone’s situation is different.  For me, I produce “Sid’s View” there, a web series that by default promotes the track’s business, a business owned by someone I’m really disappointed in right now.  And that’s going to factor in what I do next.  I probably won’t be disappointed forever, but the thought of having a brand I spent years creating now being affiliated with such a disturbing story, well…. It just doesn’t sit well with me.

As we all grow older, we (hopefully) all learn about ourselves a lil’ more.  I had an unfortunate scenario with track management in 2014 when my crew and I chose to stop producing our series.  The 2nd half of that season sucked, I was miserable.  I missed my extended family, but not enough to ignore what my conscience told me was the right decision.   I learned that season, somewhat to my own astonishment, that my love for the Speedbowl wasn’t unconditional.  There are some things that can happen that would change my affiliation with the place.  I’m still trying to figure out if this is another one of those scenarios or not.

I really don’t know what I’m going to do yet.  I wish I did because I’m tired of thinking about it.  I love the place too much to make any rash decisions.  I’m just crushed about all of it to be honest.  And while there will be different reactions within the community, I hope we stay strong throughout, because despite those differences we all want to see the place rid itself of this horrible story and thrive again for many years as the place we hold so dearly as part of our lives. 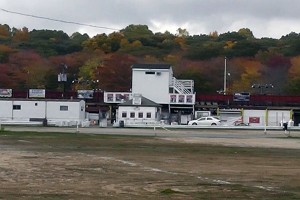 In the end, I didn’t really do too much here… just rambled on for a bit.  Much like I think many of us have in our own heads the last 48 hours.  We’re all hurting, we’re all concerned and we’re all probably exhausted with it all too.  I just hope everyone in our racing community is respectful to each other.  Be aware of how serious this off-the-track situation is.  Be sensitive to the fact that others will feel and react differently than you.  Be respectful that others will make decisions going forward that aren’t the same as yours and that’s OK if they do.  Remember that people’s love or fondness for the place shouldn’t be validated or measured by anyone’s standards but their own.   And maybe refrain from wasting energy trying to convince others to see these developments they way you think they should.  Stay true to yourself and make the decision that’s best for you and your family.

Be respectful to each other & think positive
Sid